Elasticsearch is a powerful, distributed search engine that companies like Github and Soundcloud use to power their search capabilities. This crash course is a high level overview and focuses on bootstrapping a local Elasticsearch instance using college basketball rankings while answering three specific questions:

Elasticsearch is an open-source distributed search engine built on Apache Lucene. It was created by the Elastic Company in 2010 and powers search for hundreds of tech companies, some of whom you've probably heard of: Foursquare, Github and Soundcloud. It the 'E' in the powerful ELK Stack and as a search engine, Elasticsearch has numerous capabilities and benefits:

Elasticsearch is great for searching large amounts of data (gigabytes and terabytes) and will probably do everything you need and then some. However, these benefits come with a learning curve and you need to understand the inns and outs of the Elasticsearch DSL to properly fine-tune your search engine. The answer of whether you should use Elasticsearch or another service like Postgres' full-text search (it's pretty damn good), comes down to the experience you plan to provide your users. Answering a few questions might help you decide:

If you need a full-featured, high-performance search engine with high availability at scale, Elasticsearch is probably right for you.

Each Elasticsearch cluster or search engine is distributed, allowing you to add additional nodes to scale when needed. When new nodes are added to a cluster, the cluster re-organizes itself auto-magically to distribute work. Within the cluster, there is one master node, which manages the other nodes in the cluster. A little terminology might help:

To use database terminology as a metaphor, think of each node as a database and each index is a table within that database. Following that train of logic, a shard might be a column and a document is an individual row of data:

For example, this is how a book application might use Elasticsearch: 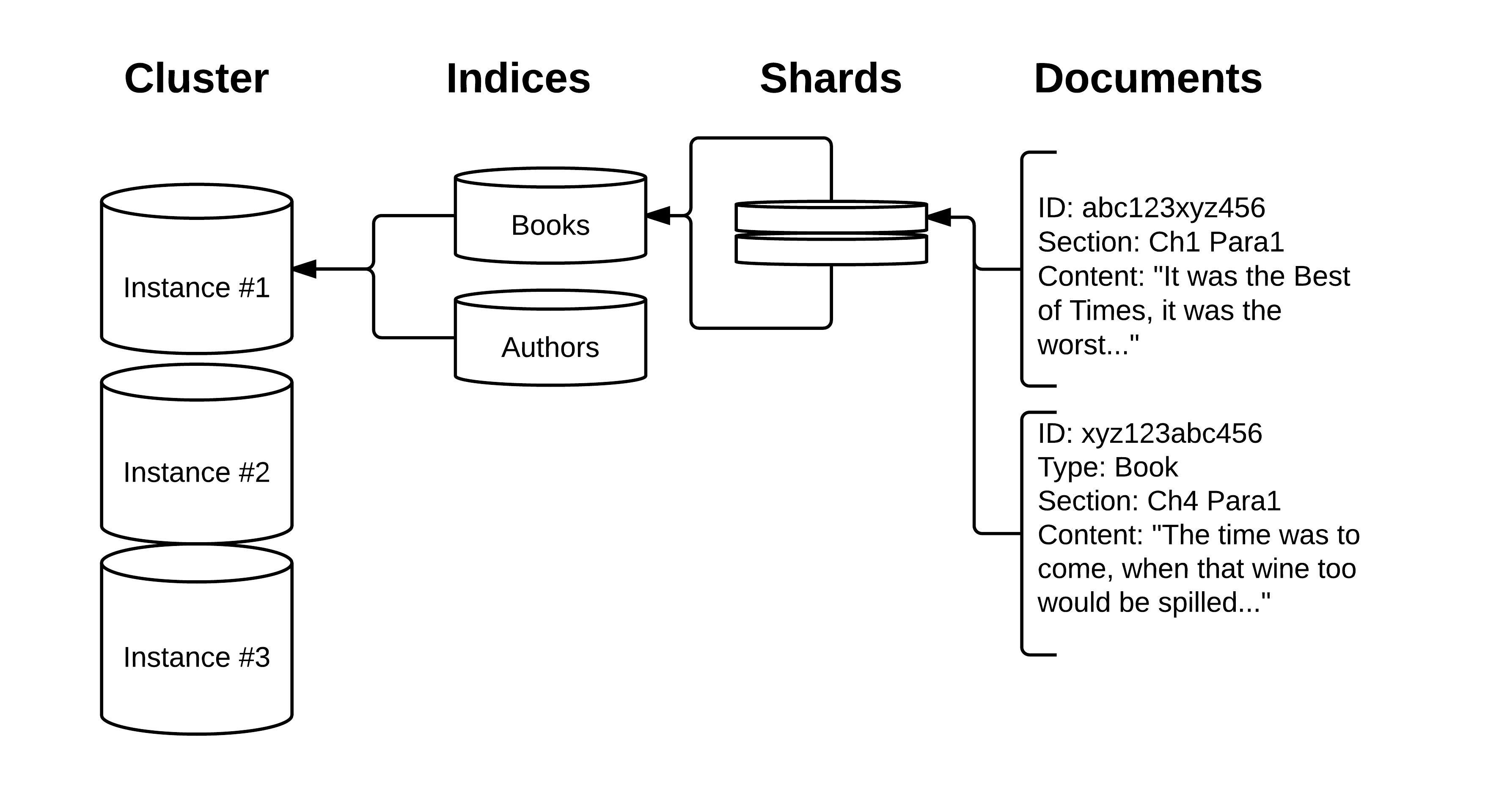 While this metaphor is not perfect, hopefully the concept of distributed indices makes a little more sense now.

Searching, aka Querying and Filtering

There are two primary uses of the Elastic DSL - querying and filtering which happen primarily against a specific index. Filtering is used for finding documents based on an exact set of parameters while a filter while querying is used for free-text search. Filtering would be most useful when asking questions with an exact answer:

Queries are similar to filters but instead calculate a relevancy score to determine the best matching result. Full text search is probably the highest use case here - think Google search.

I don't want to go any deeper on search as you drop into a rabbit-hole quickly but just know Elasticsearch's API is incredibly powerful and it can probably do what you need, and then some. Now that we have a high level overview, let's jump into setting up a local instance.

In this example setup, we are going to build a simple college basketball rankings index that we will build some basic queries with. The initial

If your server is running properly, you should receive a JSON response that should look similar to this:

Cool. Let's see what we are working with before we load in some data and view some information on our Elasticsearch instance. Run the following from your command line or visit the path in your browser:

You should receive a response that looks something like this:

That GET request the basic request you can make to the cat API. The response lists all the various paths for settings and overview information for various pieces of your elasticsearch instance.

Two extra pieces of advice moving forward: append ?pretty=true to the end of each URL to provide cleaner response formatting and appending v as a query parameter requests verbose output, which will provide headers for tables and a little more detail.

Next, let's take a look at all of our indices:

We don't get a response back because we don't have any indices, so let's create one:

You should receive the following response back: { "acknowledged" : true }

Now let's take a look at our indicies again:

This response shows all of the information Elastic has about our teams index, which is only meta data and default configurations like the number of shards at this point. Next, we are going to load some data into our index. For the purposes of this guide, we will only load a few documents in. When creating documents, you need to specify a type and in this instance I arbitrarily chose 2015 as this was the year of the RPI ratings. In practice, you will want to determine the categorial types based on the structure of your data in a process which Elasticsearch calls mapping. Now, let's add some team documents to our team index:

You should receive a response that looks like this with specifically created: true:

Now that we have some data in there, let's run a blank search now:

And now we get a big response back:

Awesome! Looking through the results, we get back a JSON object that has some meta-data on the search results including how long the query took and the number of results. Looking at the search results we the record along with the id that our instance assigned to each document and a relevancy score. I won't go into relevancy score but this becomes important when you to add full-text search.

Now let's try finding the University of Wisconsin. We are going to use the most basic match query parameter, using the word 'Wisconsin' to see what happens.

And now our response:

Our search query only returns one result for Wisconsin University because this query parameter is looking for an exact match on the word Wisconsin. Let's try a fuzzy search now on teams from the Big 12 Conference using 'B12'. We're also going to exit our query params to pass in a extra parameter to make our search extra fuzzy:

Now our search for B12 returned three results including documents with P12 and B10 conferences. Without going to deep into fuzzy search specifics, we are receiving extra search results because we specified a larger range of fuzziness in the search parameters.

This barely scratches the surface of what Elasticsearch can do but it hopefully you learned enough to know how it can be used and can start playing around with it. Also, I put together an Elasticsearch cheat sheet with some commonly used endpoints for reference. A later blog post will detail how to integrate Elasticsearch into a Rails application and go over how to use Postgres Full-Text search as well.

A Simple Process for Upgrading Rails